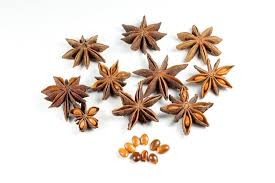 Illicium verum is a medium-sized evergreen tree native to northeast Vietnam and southwest China. A spice commonly called star anise, staranise, star anise seed, Chinese star anise, or badiam that closely resembles anise in flavor is obtained from the star-shaped pericarps of the fruit of I. verum which are harvested just before ripening. Star anise oil is a highly fragrant oil used in cooking, perfumery, soaps, toothpastes, mouthwashes, and skin creams. About 90% of the world's star anise crop is used for extraction of shikimic acid, a chemical intermediate used in the synthesis of oseltamivir (Tamiflu).

Star anise contains anethole, the same ingredient that gives the unrelated anise its flavor. Recently, star anise has come into use in the West as a less expensive substitute for anise in baking, as well as in liquor production, most distinctively in the production of the liqueur Galliano. It is also used in the production of sambuca, pastis, and many types of absinthe. Star anise enhances the flavour of meat.

It is used as a spice in preparation of biryani and masala chai all over the Indian subcontinent. It is widely used in Chinese cuisine, and in Malay and Indonesian cuisines. It is widely grown for commercial use in China, India, and most other countries in Asia. Star anise is an ingredient of the traditional five-spice powder of Chinese cooking. It is also a major ingredient in the making of phá»Ÿ, a Vietnamese noodle soup.

It is also used in the French recipe of mulled wine, called vin chaud (hot wine). If allowed to steep in coffee, it deepens and enriches the flavor. The pods can be used in this manner multiple times by the pot-full or cup, as the ease of extraction of the taste components increases with the permeation of hot water.

Star anise is the major source of the chemical compound shikimic acid, a primary precursor in the pharmaceutical synthesis of antiinfluenza drug oseltamivir (Tamiflu). Shikimic acid is produced by most autotrophic organisms, and while it can be obtained in commercial quantities elsewhere, star anise remains the usual industrial source. In 2005, a temporary shortage of star anise was caused by its use in the production of Tamiflu. Later that year, a method for the production of shikimic acid using bacteria was discovered. Roche now derives some of the raw material it needs from fermentation by E. coli bacteria. The 2009 swine flu outbreak led to another series of shortages, as stocks of Tamiflu were built up around the world, sending prices soaring.