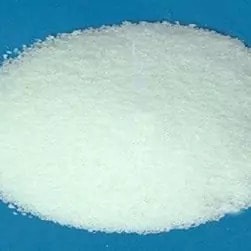 Sodium chlorate is an odourless pale yellow to white crystalline solid. It is appreciably soluble in water and heavier, so may be expected to sink and dissolve at a rapid rate. Although it is not itself flammable, contact with wood, organic matter, ammonium salts, sulfur, sulfuric acid, various metals, and other chemicals may result in fires or explosions, particularly if any solid materials are finely divided. Excessive heat, as in fires, may cause evolution of oxygen gas that may increase the intensity of fires and may also result in explosions. Mixtures with combustible materials are very flammable and may be ignited by friction.

The commercial method of production of Sodium Chlorate involves electrolyzing a hot solution of Sodium Chloride. The source for Sodium Chloride is brine water, which is converted to a purer form by removing contaminants like Calcium and Magnesium. This is then combined with Hydrochloric acid, which adjusts the pH of the solution and improves the efficiency of operation, in an electrochemical cell. This cell is heated and maintained at 70 ËšC while power in the form of electricity is used to charge this raw material mixture. Sodium Dichromate is used as a catalyst for this reaction. Chlorine gas forms at the anode in the cell while Hydrogen gas at the cathode. The Chlorine is hydrolysed to form hypochlorite series finally react with the Sodium to give Sodium Chlorate. This solution is sent for treatment to remove Hypochlorite, which are the by products, and then the Sodium Chlorate crystals are separated, washed, dried, and sent for crushing and packing.

Pulp and Paper Industry: Sodium Chlorate is widely used to produce Chlorine Dioxide (ClO2), which is used as a major component for bleaching wood pulp. This wood pulp is then processed to give good quality white paper products.

Agriculture Industry: Due to its property of being phytotoxic to green plants and its ability of killing through root adsorption, it is used as a non-selective herbicide. It is also utilized as a defoliant and desiccant for products such as rice, corn, flax, etc.

Aerospace Industry: When Sodium Chlorate is mixed with iron powder and oxidized, it produces more Oxygen than it consumes and Chlorine as the by-product. The Chlorine is absorbed by Barium Peroxide. This phenomenon finds application as chemical Oxygen generators in aircrafts.